I recently listened to a large sampling of the albums on the well-known Rolling Stone’s 500 Greatest Albums of All Time list. When it was first published, a vocal minority of critics, particularly those too young to have lived though the release of the material on the list (the vast majority of it was from the 60s and 70s), claimed that it did not adequately capture the truly influential music from the broad spectrum of popular music.

These are my criteria. First, the album was issued between 1977 and 2007. The beginning year is point of reference for my listening experience; everything prior to this was B.P. (before punk). While I enjoy listening to some of the groundbreaking music such as those featured on the Rolling Stone list, without the personal connection to them that comes from coming of age in those times, to me they will forever languish as museum exhibits. The 2007 endpoint is both to make it an even thirty years and also to get some distance from new releases.

Second, the album is in its original form as intended by the artist. No Best Of’s, no posthumous compilations of EPs, etc.

Third, I informally weighted the prospects by their popularity on previous lists. If an album is a regular on these lists, it had to be twice as good to make it on mine as a less-known album.

Fourth, I tried my best to avoid repeat artists. The only exceptions were albums that I simply could not fairly leave off the list.

So without further explanation, here it is:

25) Audioslave – Audioslave (2002). Shortly after the breakup of Rage Against the Machine, former Soundgarden singer Chris Cornell and the guitarist, bassist, and drummer from Rage formed what seemed like a side project, Audioslave. However, their debut album held the same explosive intensity that made Rage popular, along with intelligent lyrics and vocals by Cornell.

24) Bob Marley & The Wailers – Exodus (1977) This massively popular album made reggae a household name. It truly is the ultimate desert island record, because what better music to play on a desert island than reggae.

23) AFI – The Art of Drowning (2000). Before AFI became a darling goth rock band on a major label, they were another bunch of East Bay punks. Their final album on their original label, The Art of Drowning is a tightly produced showcase of the band’s brooding, introspective lyrics, and punishing sound. Rarely has such intensity been so well documented.

22) Fugazi – The Argument (2001). Indie gods Fugazi have always made groundbreaking music that defies genre conventions. They released The Argument as their last album before going on indefinite hiatus. It is by far their most coherent and accessible work and if it turns out to be their final release, it was a fitting swan song.

21) Bad Religion – Suffer (1988). Southern California punk bad Bad Religion crafted a masterpiece with their trademark hyper-literate lyrics and 80s hardcore sound. In later years, they never advanced beyond the formula they perfected on Suffer, and who could blame them. It has few equals.

20) Operation Ivy – Energy (1989) Like Minor Threat before them, East Bay ska punk legends Operation Ivy produced a scene-rattling new sound that led to too much success too fast for four young men. The band broke up after only two years, almost coincidental with the release of their debut LP, Energy. But their influence is still felt in contemporary punk. Their groundbreaking style fused ska, 80s minimalist hardocre, and a positive attitude sorely lacking in the scene, and the country, at the time. Two of the members went on to form the hugely successful pop punk band Rancid, but they could never match the energy capture on Energy. 19) Frou Frou – Details (2003). Early in her career, Imogen Heap was a relatively unknown British singer-songwriter in the vein of Alanis Morissette. Her breathy voice was a standout on her inconsistent debut, i Megaphone (a clever anagram of her name). In 2001, she teamed up with writer and producer Guy Sigsworth to create an unique electronic pop album featuring her signature octave-leaping vocal style on top of lush soundscapes. The album was not a commercial success, but the inclusion of one of its tracks in Garden State made Frou Frou famous. Mishandling of the album by the record company had soured the chances of another album. Heap released a second solo album in 2005 and a third in 2009 but both fell far short of Details. Here’s hoping for a reunion.

18) Stiff Little Fingers – Inflammable Material (1979). This blistering debut album by Belfast punk rockers smartly walked a fine line by making an overtly political album that didn’t get dragged down by its message. True to punk’s early days, it wasn’t afraid to experiment, such as the finale “Closed Groove.” Unfortunately, they could not stay together and broke up in 1982.

17) Idlewild – 100 Broken Windows (2000). Idlewild began as a indie band from Edinburgh. Their debut, Hope is Important, showed a large punk influence. However, their follow up was a true pop gem that combined their ear for catchy hooks with Roddy Woomble’s distinctive voice.

16) Tool – Lateralus (2001). Early in their career, L.A. headbangers, Tool, hinted that they were smarter than their own genre. Their 79-minute magnum opus, Lateralus, proved this without a doubt. Full of challenging time signatures and lengthy running times, the album was the antithesis of its radio-friendly peers. Like a dark symphony, the theme builds to its peak in the masterful three song cycle Disposition / Reflection / Triad. 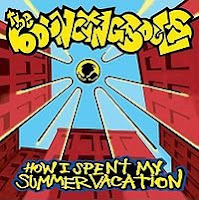 15) Bouncing Souls – How I Spent My Summer Vacation (2001). Jersey punk rockers The Bouncing Souls paid their dues for years before achieving success. As chronicled in the entertaining documentary Do You Remember? the band faced a tough choice in having to kick out their best friend and drummer Shal. The band considered calling it quits but instead found a new drummer and learned how to be a band again and have fun. The result of this creative energy is their best album to date, featuring the band’s trademark anthemic singalongs with lyrics from the heart.

14) Minor Threat – Minor Threat (1981). Clocking in at just 9 minutes and 20 seconds, DC straight edge punks Minor Threat’s debut EP exploded onto the early 80s punk scene and cast an immense shadow over the next decade of underground music. Espousing a lifestyle of no alcohol and drugs with a conviction that could only come from nineteen year olds, Ian Mackaye and company changed music and youth culture forever and left a lasting manifesto.

13) Rage Against the Machine – The Battle of Los Angeles (1999). Revolutionary rap-rockers RATM developed a loyal fan base of disillusioned youth starting with their inspired debut album in 1992 featuring as its cover the Pulitzer-prize winning photo of a monk setting himself on fire to protest the Vietnam War. But it wasn’t until 1999’s Battle of Los Angeles that Rage truly demonstrated the brilliance of their thought-provoking lyrics and inventive style led by the mind-bending guitar arrangements of Tom Morello. Producing numerous radio hits and cementing their reputation, it was fitting this was their last proper release before disbanding only a year later.

10) Yeah Yeah Yeahs – Fever to Tell (2003). Consisting only of guitar and drums behind the screechy vocals of Karen O, the band made the old new again with their catchy garage rock style. Two tracks in particular, Maps and Y Control, showed there was a lot of depth behind the seemingly spare formula and they remain artists to watch even as their sound has matured on subsequent releases.

9) Weezer – Weezer (1994). There is not a wasted second on this wonderfully catchy debut from Southern California nerd rockers, Weezer, led by Rivers Cuomo. It was tempting to eliminate this from the list because of their inability to know when to quit (and subsequent release of two self-titled albums) but it’s both impossible to dislike this album and to discuss 90s music without referincing it in some way. 8) Shakira – ¿Dondé Están Los Ladrones? (1998). Forget the airbrushed blond on 2001’s international megahit Laundry Service; Shakira’s second album cover features the singer/songwriter with her natural hair color and her hands covered in dirt. Building on the strengths of her reserved debut album, Shakira wrote an accessible pop album that touches on the personal and the political, belted out in her distinctive bleating voice. Diverse influences including Western rock music, her Lebanese heritage, as well as immersion in the cheerful pop of Latin America, combine in this ambitious work that stretches predictable boundaries. There’s a reason it still remains one of the top Spanish-language sellers in the U.S. In any language, Shakira rocks.

7) Pixies – Doolittle (1989). Like Dinosaur Jr., Pixies were tremendously influential over the movement that would eventually be called alternative rock and grunge. Widely regarded as the band’s most consistent and accessible album, Doolittle becomes only more relevant as it ages. In 2009, for the 20th anniversary of its release, the Pixies went on a limited tour where they performed the album in its entirety.

6) Catch 22 – Keasbey Nights (1998) Suburban Jersey ska punks Catch 22 parleyed their demo Rules of the Game into a brilliant full length album that many consider the pinnacle of the genre.

5) Radiohead – OK Computer (1997). Following the success of the straight ahead rock formula on The Bends, Radiohead showed a glimmer of the experimentation to come on the accessible and much-praised OK Computer. Repeat listenings to most of the songs is a necessity, since Radiohead pack about as much into each song as other artists, if their lucky, manage to fit into entire albums.

4) Smashing Pumpkins – Gish (1991). Before the runaway success, the breakups, the reformations, and all the other baggage that hounded the band, the Smashing Pumpkins were four unknown alternative rockers recording four-track demos in 1989. Their debut album was a minor hit and hinted at brilliance yet to come. It combined the indie influence of grunge with the production and expanse of stadium rock, a formula Corgan would perfect on the band’s follow-up. Oveshadowed by later albums, Gish remains an unpretentious powerhouse that remains some of the band’s best, and certainly most honest, work.

3) Radiohead – Kid A (2000) A critic once remarked that it’s hard to believe Kid A is from the same band that released OK Computer, let alone from the same planet. Rejecting the mega stardom and all the expectations of another hit following OK Computer, Radiohead reinvented themselves as soundscape sculptors with one of the most interesting (and disliked) albums of the era.

2) The Clash – London Calling (1979). This is the magnum opus from The Only Band That Mattered. Although they suffered from inconsistency, especially on their later releases, everything on London Calling is spot on and this double album remains in a league of its own. 1) Smashing Pumpkins – Siamese Dream (1993). Hailed as the next Nirvana, the Smashing Pumpkins had a enormous amount of pressure on them to deliver a hit with their second album. The process nearly destroyed the band with songwriter Billy Corgan suffering from a nervous breakdown and drummer Jimmy Chamberlin struggling with alcoholism. In spite of this, Siamese Dream exploded as a megahit on the early 90s alterna-rock scene.

The album continued to expand their signature style of droning overdubbed guitars that, unlike most of their peers, was influenced far more by shoegaze and 70’s stadium rock than punk. Above all, the tracks are expertly arranged. The album builds intensity during the opening five tracks, then mellows out with the radio hit Disarm. You can almost imagine flipping over the vinyl for Side B when this transition occurs, even though the format was dead by the time the band released any material. This alternating build-up and release of tension is evident both within and between songs, and was one of the things that made (the original) Smashing Pumpkins such a great band, and it is executed flawlessly on Siamese Dream.